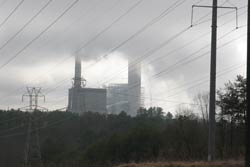 Two years ago, some of the biggest banks announced the Carbon Principles. Heralded as a new path for the banking industry, the Carbon Principles were supposed to make it “tougher to finance conventional coal-fired plants in the U.S.” Today we release our new report which examines the implementation and impact of these Principles, and the role that banks play in financing filthy new coal plants – and the news is not good. Our research reveals that, while the broader economy has been shifting away from new coal power plants, the banks that have signed onto the Carbon Principles are continuing with business as usual in regards to financing dirty coal. Coal-fired power plants provide nearly 50 percent of our electricity and, pound for pound, are the planet’s dirtiest source of energy. Burning coal is the nation’s top source of air pollution and toxic mercury, and it is responsible for one third of the country’s greenhouse gas emissions—nearly 2 billion tons per year. Key Findings From Our Report: Read more: The Principle Matter: Banks, Climate & The Carbon Principles | Rainforest Action Network http://www.ran.org/carbonprinciples#ixzz1CzmdW46U